Dwight Eisenhower was brilliant. He was also incredibly productive during his life of leadership. Aside from being the 34th president he was President of Cambridge University, a five-star general in the army, the first Supreme Commander of NATO, an avid golfer and artist. On top of all of that though, he’s most known for his successes as President of the United States where he initiated the Interstate Highway System, DARPA (which launched NASA, the foundation of the internet as we know it today and many other technical advancements), National Defense Education Act and vision-casted innovative ways to use nuclear power as a sustainable resource. This all completed in a short 8 year window of time.

He’s known to many as one of the most “effective” presidents in terms of getting a lot done in office on his list of agenda items and a lot of this is due to his innate ability to prioritize and make things happen. What you may not know about Eisenhower is his invention of the productivity box, also known as “the Eisenhower Box.”

If there’s anyone I want to learn how to be productive from, it’s a man with a past as successful as Dwight Eisenhower. Learning how to prioritize my tasks will allow me to reduce wasted time, increase productivity and increase my effectiveness. The outcome will translate to the opportunity to change the world we live in and impact other’s lives.
Our time is way too precious to just throw away. 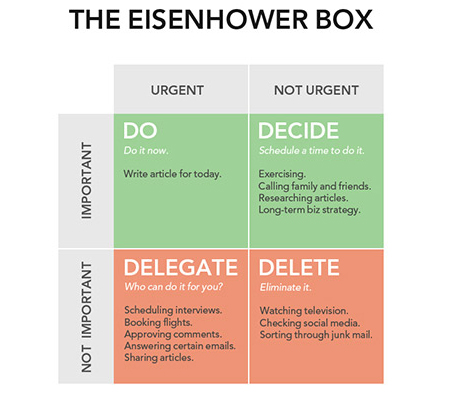 Regardless of the position you hold at your organization, there’s always room to grow. If you recently started as “the intern”, you will have to figure out how to be someone they need full time if you want to stay past the summer gig. Maybe you’re just a middle level executor, every one would notice a massive increase in productivity. And if the organization you’re at now doesn’t, I promise your next employer will steal you if you have a history of being a go-getter.

The greatest thing we all carry with us is our history of success.

One of my favorite authors, Seth Godin, recently wrote in Linchpin that the resume is dead. What is more important is the trail of success and impact you’ve made along your journey. The question is not how well formatted your “piece of paper” is, rather the impact and depth of the bread crumbs you’ve deposited along the way.

We don’t have time in our lives to just do what we want to do, because the world needs us to step up and lead. It’s leaders, and those who make the most of their days, that create new systems, develop innovative solutions, push the envelope and in the end are most rewarded for their risk. The problem is this: In a day in age where the resume is loosing it’s impact, so it the day where everyone has an assistant.

Our economy can’t support that anymore, and those who are successful need to own their own schedules and their own outcomes. Eisenhower was able to unlock pandora’s box on how to make the most of his minutes and hours on earth… what will you do with that responsibility?