I posted on twitter the other day the following statement and wanted to talk about it here due to the response I got. Some were encouraged by it and others seemed to have more questions than excitement.

The people I know who have the BEST ideas, are also the people who are okay with having bad ideas because ideas (good or bad) breed ideas

We’ve all been there… sitting in the meeting and the task at hand is to come up with a new idea. Deep down inside, you want it to be your idea and garner respect from everyone in the room. However it seems that you are coming up empty. 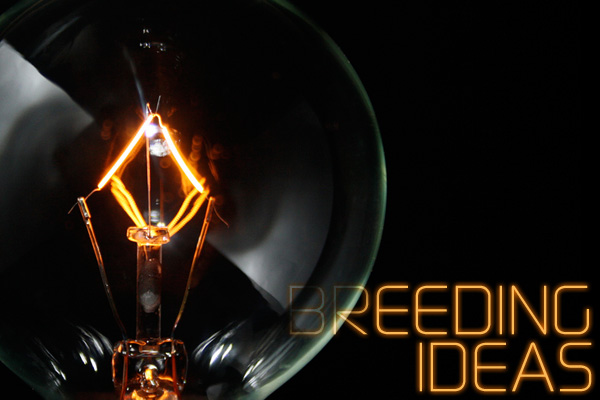 One of the core pieces of this tweet is that it takes a bunch of bad ideas before we get to a good one… but the person in the room who comes up with 100 ideas has a higher likeliness (from a pure mathematical sense) of coming up with a good idea! For me it takes a good 5-10 bad ideas before the good idea surfaces. Make it a goal to just share more ideas… because Ideas breed ideas.

2. Your Bad will Lead to Good.

I’ve sat in so many brainstorming meetings where someone will put an idea on the table that can’t or won’t work… however that single “bad” idea is what leads someone else in the room to come up with a more plausible idea. Don’t be afraid to share the bad idea, because the bad idea may lead to someone else’s or even your good idea. Ideas breed ideas.

Finally, I want to share that our goal when coming up with a new idea shouldn’t be complete originality. I had a professor once share with me that “everything has already been created” She went on to say that great designers and artists are actually brilliant of making something beautiful out of what already exists. Don’t worry about reinventing the wheel if the wheel already exists… odds are good the stress of coming up with something brand new is what is limiting your ability to become more creative.

In this process I encourage you to become more of who you already are. Don’t try and follow suit of someone else’s creativity or some other artists design. Mark Driscoll shared with a group of pastors recently, “be careful of the podcasts and pastors you listen to, You may begin to adopt their voice.” What he is saying is this, Be careful about only looking at one or two other artists work, or you may naturally want to copy them. If you’re going to seek inspiration, make sure it’s from a multitude of artists with a wide variety of styles and approaches.